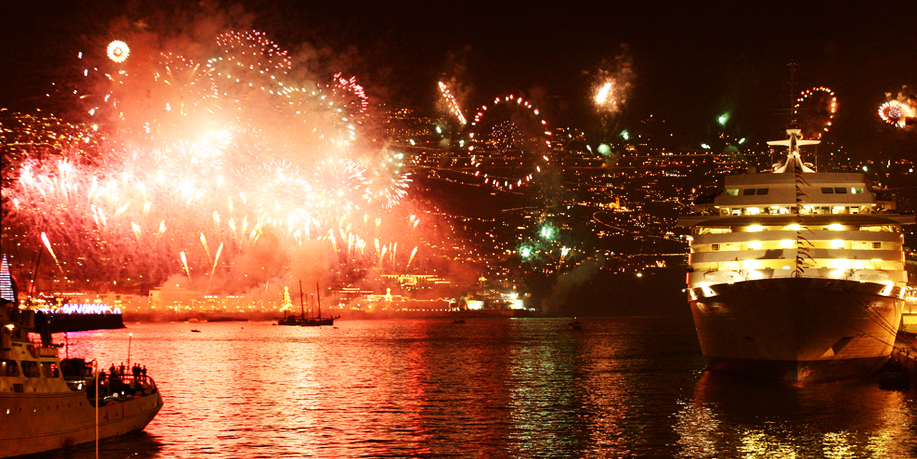 The arrival of the decorative lights in the streets of the city centre of Funchal, during the month of December, sets the beginning of the Christmas and New Year Festivities programme.

These festivities culminate with the famous fireworks show, officially recognised in 2006 by the Guinness Book of Records, as the largest fireworks show in the world.

These commemorations consist of a rich and extensive programme of cultural, religious, ethnographic and artistic manifestations that take place throughout the entire month of December and end with the celebration of Twelfth Night.
Find out more about what to expect from Christmas and New Year Festivities in Madeira:

December 23rd
Market Night is held on December 23rd, when Madeirans do their last-minute Christmas shopping and it is in this hustle and bustle that the spirit of the “Festivity” can best be felt, the nickname given by the Madeirans to identify Christmas. The inhabitants move towards the Farmers’ Market where the surrounding streets, which are closed to traffic, are occupied by various points of sale opened throughout the night. They have varied local products such as flowers, shrubs, fruits, vegetables, sweets, wine-and-garlic meat sandwiches and typical drinks, such as poncha.

At nightfall the biggest attraction of the day begins, a traditional Christmas carols show, where locals take on the role of true artists. Also the participation of music bands and folklore groups helps to maintain the atmosphere of celebration and fun until dawn.

Organised by the Madeira Athletics Association, the Funchal Road Race is one of the oldest sports events of its kind in Portugal and Europe. This race that has attracted innumerable national and international athletes to the island, brings lots of adrenaline and excitement to the Madeiran capital.

The fireworks show lasts for about eight minutes and is distributed by several fireworks stations in the Funchal amphitheatre, the waterfront, the city centre, the sea and one station on Porto Santo Island.
This grand spectacle that is one of Madeira’s most important tourist events, was internationally recognised in 2006 by the Guinness Book of Records as “The largest fireworks show in the World”.

On the evening of January 5th to 6th the Twelfth Night songs are sung in the neighbours’ houses, a little throughout the region. It is this spirit that seeks to recreate the popular tradition of the Madeiran traditional songs that were made on this day, door to door, in various localities of the ARM, which the Association of the Casas do Povo of the Autonomous Region of Madeira organises and produces in the Auditorium of the Municipal Garden of Funchal, the musical show “Cantar os Reis”, marking the end of the New Year’s festivities.

Other initiatives included in the programme:

Christmas begins with the “Missas do Parto” (childbirth masses) starting December 16th and ending on Christmas Eve, with the midnight mass. The “Missas do Parto” – the novenas – are nine in total and are celebrate early in the morning. After the mass, believers gather in the churchyard to hear the chanting, accompanied by groups of strings, accordions and castanets, with no shortage of the “despiques”, which are followed by the snack with spirits, liqueurs and cakes.
In some parishes of Madeira such as Câmara de Lobos and Camacha, the tradition of philharmonic bands is maintained, accompanied by other instruments, such as castanets, bass drums, braguinhas or accordions, of going door to door, in a joyful symphony, to awaken its locals and rush them to this typical ritual of our land.